March 8th is International Women’s Day, and so to celebrate (albeit a day late), I’ve decided to highlight some strong female characters of fantasy literature. (I suppose what I really should have done was highlight or interview a female author, but I didn’t plan this out well enough for that. Also, I just wanted an excuse to blog about fantasy characters, because I love fantasy. So there’s that.)

The Matriarchal Land of Oz 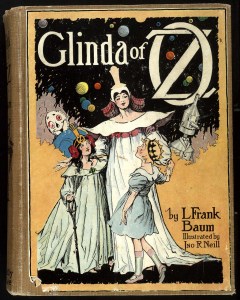 So was Baum a supporter of women’s suffrage, a feminist, or perhaps just a keen observer of people (male and female alike)? That’s a discussion for a different post. But whatever his reasons or method, Baum excelled at writing strong women. Not women who acted like men – but women who were every bit as feminine as a lady of the 1910s should be while still smart, resourceful, and did not usually require a man to get them out of a scrape.

A lot of the most important characters in the Oz books are female. Of course the first character we meet is Dorothy. While Dorothy starts out as a bit of a brat in the books (which is forgivable, because she’s like ten years old) she’s smart and independent enough to not only help herself, but all of her friends, too.

Other female characters figure prominently throughout the series – matronly Aunt Em, the flighty but fun-loving Patchwork Girl, and the sweet and kind Princess Ozma. Baum did not go overboard with his strong female leads, though.

As far as gender balance is concerned, Baum gave equal time and importance to both female and male characters. For every story that featured Dorothy (or another girl) as the heroine, there was another story that featured a boy protagonist, like Ojo the Munchkin Boy or Prince Inga. And even though Ozma or Glinda sweep in to save the day more than a few times, plenty of stories have the Wizard or the Scarecrow coming in to help the heroes.

Glinda the Good Witch of the South

Probably the strongest female character in the Oz books is Glinda. Here is a short exchange that displays Glinda’s quiet, feminine strength:

“She is a terrible old woman!” remarked Tip…[referring to the evil witch Mombi] “And obstinate, too.”

“I am quite obstinate myself,” returned the Sorceress, with a sweet smile; “so I do not fear Mombi in the least.” –from The Marvelous Land of Oz

The sweetly-smiling obstinate Sorceress in this exchange is Glinda the Good, and this occurs right before she leads her army to dispense a butt-whooping on the bad guys. Just in case you thought Glinda was nothing but bubbles and frivolity.

Glinda makes no attempt to behave like a man – she enjoys her gowns and her jewelry and her glamorous palace, and would rather ride in a carriage than walk, thank you very much. She does not try to act tough, and is not interested in displays of power to prove that her magic is stronger than the Wizard’s or Ozma’s even the Nome King’s magic. She is kind and patient, but refuses to budge if she knows she’s in the right (which she usually is). And if you cross her or endanger her people, she will simply blast you off the map and be done with you.

If you’ve seen the 1939 movie The Wizard of Oz or the Broadway musical Wicked, you might not be thinking of Glinda as much of a strong character. After all, in the movie, one has to wonder about Glinda’s supposed wisdom if she can’t tell that the dusty farmgirl and her little dog aren’t magicians at all. And in Wicked, the air-headed blonde who can’t even cast a spell on a bland dress to turn it into a ball gown hardly seems like Great Sorceress material. (By the way, I adore both the movie and the Broadway musical, so I’m not trying to put down either one).

The most accurate depiction of Glinda’s character that I have seen is in the 2013 movie Oz the Great and Powerful. Here Glinda is beautiful, gentle, and very feminine, but she is secure enough in herself to not fall prey to the Wizard’s womanizing charms. She also heads up an army, and has an all-out battle with the Wicked Witch of the East. (I know there are many other screen and stage depictions of Glinda, but I think this blog post has gone on long enough already.)

But back to Baum’s original character. I believe that modern writers, especially fantasy writers, who want to write strong female characters should do themselves a favor and read Baum’s Oz books. At a time when strong, well-developed female characters weren’t a popular story element – especially in children’s books – Baum unobtrusively wrote about empowered women.

So if you want to write about – or just read about – strong female characters, go follow the adventures of Dorothy, Ozma, and Glinda the Good.

8 thoughts on “Strong Women of Oz”