I’ve seen this topic circulating around the writing community a lot lately: when is it okay to use curse words in your story? And on a related topic: how much current slang is okay?

I believe the short answer is: “it depends.”

By way of a long answer, these are some factors that I think every writer should consider when using slang and/or curse words in their stories:

This is the most important factor, I think.Obviously you wouldn’t put a lot of four-letter words in a children’s book or middle grade chapter book, but intended audience covers more than just children versus adults. Is your intended audience, overall, likely to expect and enjoy curse words in a story, or be put off by them? If you write cozy mysteries and you know that your largest readership is women over the age of 50, then keeping the cuss words to a minimum is probably a good idea. But a book geared towards adult men with an interest or background in the military would be odd if it didn’t have more than a few bad words in it.

In The Thin Man movies from the 1930s – Nick Charles is a flatfoot who sends men up the river. In context, the slang makes perfect sense, mostly…

The same concept goes for slang and jargon. Books written for the young adult market usually have more slang terms than, say, those cozy mysteries for the over-50 crowd. The thing to remember about slang, however, more so than swear words or dirty language, is that the terms go out of date quickly. An intended audience of the 18-25 age group may lose interest in your book in a few years if the slang usage makes it appear too dated. But no matter your intended audience, all slang goes out of date eventually.

This is similar to the first point, but it’s more about expectations set by a specific genre or sub-genre. “Romance” is a pretty broad genre. But which type of romance would be more likely to have a lot of four-letter words used – inspirational historical romance, or modern erotica? The same goes for something like literary fiction versus a thriller. Readers of the thriller genre would be put off by a book in their favorite genre that didn’t use words any fiercer than “gosh” and “darn.” 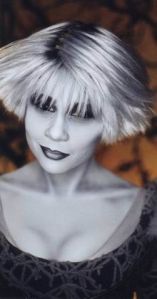 Chiana, from the TV show Farscape, has a mouth like a sailor. But she usually talks about frelling tralks and pieces of drenn, so it’s okay.

The fantasy and science fiction genres often get around the sticky question of curse words and slang by inventing words as part of the world-building. The meaning of an invented word can be implied by the context of its use, and the reactions by other characters.

Overall tone of the story, and individual characters’ traits

This factor sort of combines the previous two points. In a thriller, for example, where curse words would be acceptable and even expected, characters like the police officers and the bad guys would probably be using those words more than the pre-teen daughter of the victim (probably. I’m sure there are thrillers that don’t follow this formula, but this is just an example).

Similarly, in a historical romance, the villain (or the bad-boy hero before he gets reformed) would probably be the only characters to use swear words. A character’s age, background, and personality can be revealed and enhanced by using appropriate slang and curse words.

Always keep in mind, though, the overall tone of your book (light and funny? Dark and gritty?) and your intended readership.

What’s your take on swearing and slang usage in books?

9 thoughts on “Using Slang and Curse words – How Much is Okay?”